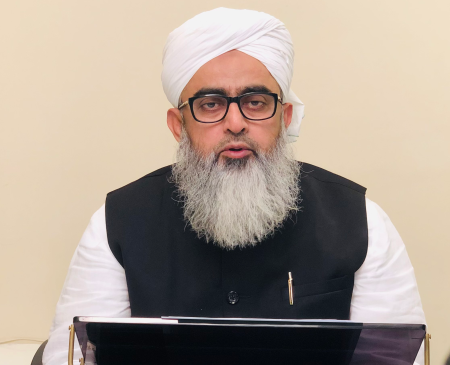 Born in Junagadh town of Gujarat State in India, Maulana Muhammed Shakir Noorie comes from a humble family background and has completed his education with memorization of the Holy Quran & its recitation, learning Islamic sciences and Ulooms relating to the Sunnah of the Holy Prophet Muhammed Swallalahu alaihi wa sallam. He has been lucky to have the chances of spending valuable times in the company of several pious & blessed friends of Allah, of his times, through whose blessings and guidance, today he rose as a mentor to several people with titles of “Ataa e Huzoor Mufti e Azam e Hind” and “Daaiye Kabeer”.

In his early youth, he dedicated himself to revolutionising the Muslim Ummah, especially the youth, with full zeal and vigour, through his worldwide, religious, non political movement, Sunni Dawate Islami, to make them sincere practising Muslims and ardent followers of the Holy Prophet. This movement has been a blessed mission for humanity since 1990s, with its headquarters in Mumbai and operations globally. His hard work, sincere selfless efforts coupled with humbleness and sacrifices, earned him the blessings of eminent scholars of Islam and several Shuyukh. His exemplary and simple lifestyle, liberal Sufi thinking, strict adherance to the principles of Ahle Sunnat wa Jamaat and his aura of inspiration has been recognised from people of all walks of life. The largest Sunni Muslim congregation is held under his leadership annually in the financial capital of India, Mumbai, and attracts a gathering of over 300,000 people from India & abroad.
His inspirational speeches on a vast range of topics, captivated the hearts and minds, transforming thousands of people worldwide. His emphasis on amalgamation of modern, religious & spiritual educations coupled with latest technological adherence for Muslims has provided the Ummah with several scholars who are now global preachers and educators, spreading the radiant and fragrant rays of the true message of Islam & this has benefitted the Ummah to become literate & sincere practising Muslims worldwide. Sunni Dawate Islami is managing a vast network of several institutions of modern and religious studies, which include 50 Darul Ulooms & 15 English medium schools in India, apart from the SDI Educational Centres in Bolton, UK & Mauritius.
Maulana Muhammed Shakir Noorie has authored almost over forty books for the benefit of Ummah on a vast range of topics in many languages, to inspire a believer to remain steadfast in fulfilling the commands of Allah, the Almighty & to become true followers of the Holy Prophet. Apart from this, he has initiated several human welfare campaigns of women empowerment through education, save a family mission, feeding & clothing the poor and downtrodden, counselling assistance to the youth, relief to grief and tragedy-stricken people and also against drug abuse and intoxicants, which has even gained recognition, not only in India but also in Europe. A pen picture of his entire journey in these varied fields, depicting adherence to the Prophetic conduct is documented in detail, in a book titled “Tajalliyat e Noorie” which has been published by the mission. He is also privileged by the Royal Islamic Strategic Studies Centre, Amman, Jordan by his inclusion amongst the top 500 most influential Muslims across the globe, every year between 2013-2019, with the exception of 2018.
Today, this blessed mission is rapidly spreading in several countries across the globe and he still continues to travel extensively not only to all parts of India but also worldwide. Maulana Muhammed Shakir Noorie has also risen spiritually, being a disciple of Mufti e Azam e Hind Allama Mustafa Raza Khan Noorie of Bareilly Shareef, to the rank of a ‘Shaykh’ with a considerable number of disciples around the world, after receiving the Ijazah and authority from eminent Islamic scholars & Shuyukh, to name a few, Former Sajjada Nasheen of Baghdad Shareef and a descendant of Ghawth ul Azam, Shaykh Sayyed Yusuf Geelani Rehmatullahi alaih, Sajjada Nasheen of Marhera Shareef, Hazrat Allama Sayyed Hasnain Miya Nazmi Qadri Barakati, Allama Qari Amaanat Rasool of Pilibhit Shareef, Allama Maulana Abdul Mannan Raza Khan and others.
This concise biography depicts the journey of Ameer e Sunni Dawate Islami Maulana Muhammed Shakir Noorie. Despite having a very basic and simple home life, his numerous achievements makes one realise the difficulties and hard times he had to face throughout his journey. But the root cause of his satisfaction and success has been his staunch belief and determination, which he relied upon, leaving everything to Allah the Almighty and the Beloved Prophet (Peace & Blessings of Allah be upon Him).